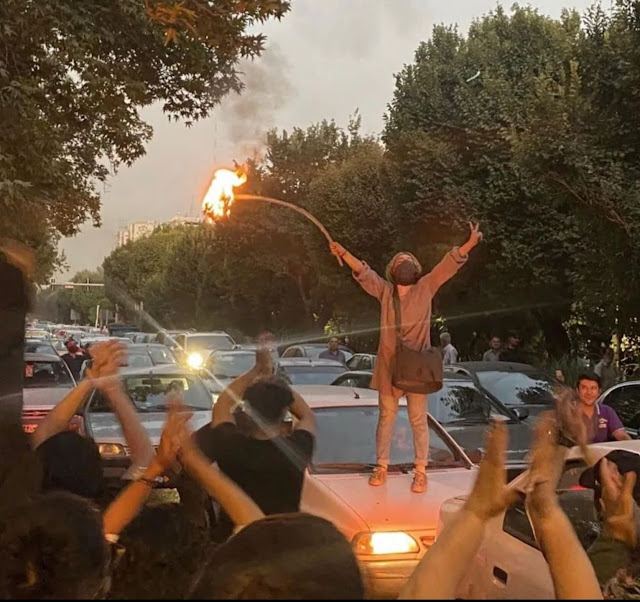 I was born in Iran and lived and worked there for 28 years before choosing Australia my new home. I thought to write this article for my friends and colleagues outside of Iran to share more insights on what’s going on inside Iran and create more awareness.

To give you context, women in Iran regardless of their religion and beliefs must cover their bodies and hair in public places.

The government also reserved the right to knock on your door and come inside and check what you are up to at your home! Women must cover up in front of men even in private places unless they are their immediate family members (husband, dad, uncle, grandfather). No one is allowed to drink even at home!

Rhythmic songs which give you good vibes to dance are illegal! Solo women singers cannot sing in public, their voices are considered Haram (illegal and forbidden)! Women are not allowed to dance or even laugh loudly in public!

The Iranian government controls every aspect of Iranian lives. Let’s think about a simple life event like a wedding! What the Iranian government dictates is the wedding party must be separated! Women in one room and men in another room! No Alcohol to drink and cheer! Your parents cannot dress up and seat beside each other in one room to celebrate! Unless your mother and all women in the room cover up!

Imagine people separated in two different rooms, the groom in one room and the bride in another room, the DJ playing government-approved music when a couple celebrating one of the happiest moments of their life!

Most Iranian, do not want this version for their dream wedding! They accept the consequences and go ahead with a version closer to what they want. . That makes the whole wedding ceremony more stressful. Luckily, some police officers and officials have empathy with the bride and groom and close their eyes and ignore it. But there might be a chance the religious police (Basij) or Police find out about the event and come in and ruin the wedding.

Why did I share this with you? To give you context on how the Iranian government controls people’s way of life, what to wear, what to eat and drink and what to believe! They use women’s bodies for their propaganda! They force women to cover up to show their influence and power! They use covered-up women as a symbol of Islam!

At age 6, girls cannot go to school and get an education if they do not wear mandated uniforms and cover their hair!

Women are not allowed on the streets if they do not wear hijabs and cover their bodies. Women are not allowed to enter universities or government organizations if they have applied make-up on their faces or nail polish on their fingers! At the entrance of each organization, there are officers who check the apparencies of women and if it is not government approved, they deny their entry!

If a person does not believe in one of the five government-approved religions, they are not allowed to go to university and get higher education. They cannot get hired by the government or government-owned organizations! If they are actors or singers, they do not get a license to work. If they are athletes, they cannot participate in competitions.

Based on laws in Iran, women’s inheritance is half of their brothers! Women’s compensation if they accidentally got killed or injured is half a comparison of what men would get!

Even when in governmental approved and Islamic ceremonies, women need to stand behind all of the men!

Women cannot study certain majors at university. There is a clear glass ceiling for top government jobs! Women are not eligible to become president, Islamic clergy or supreme leader!

As well as a police organization, Iran has religious police! Some call them morality police! Morality police are responsible to check women in public and check if they have covered up well or not!

About 15 years ago, I got arrested by the Morality police! I was walking with my husband, Harry Sayari and getting out of the metro station in Tehran CBD. Someone shouted and asked me to stop! He said I haven’t covered up properly and I need to go to the police station! When I asked why they said your pants are short, you are not wearing socks and your ankles are visible! They asked me to go inside a police van! When Harry, asked where they take me. They didn’t answer and walked away!  I was very frightened but decided to remain calm and not show my fear! Kudos to quick thinking and response of Harry, from the van window I saw a glimpse of Harry on a Motorcycle following the van. Harry quickly stopped a person with a motorcycle and asked if he could give him a ride and follow the Van! Like action movies! That gave me comfort that at least someone knows where they take me! I thought the best way to get away from this situation is not to argue with the religious police and find what they want from me to do!

At the station, they took a mugshot of me and created a document with all of my details. Religious police humiliated me and treated me as if I have killed someone and done a serious unforgettable crime! They detained me for hours. I didn’t have access to my phone.

At the station, I could see on the walls, maps of different suburbs of Tehran with dots on hair salons, gyms and areas where women mostly go. I assume they used it as their reference to go and check out women.

Police eventually released me when Harry brought me approved clothing to change!

What I have seen firsthand, if a women start questioning or opposing them, the religious police do not hesitate to become physical and hit them! Then they create another document against them and keep them in detention and then send them to court!

In the past 43 years, since the inception of the Islamic Republic of Iran, the Iranian government systemically find ways to limit women!

Let’s talk about #mahsaamini, she was a victim of the brutality of the religious police. What governmental heavily edited CCTV camera shows, Mahsa faints in detention and then dies in hospital a few days after.

The government says she died of a heart attack, but the footage clearly shows she holds her head before passing out and going into a coma! People believe police hit her on the head with a baton and later hit her head to the car frame while forcing her to get inside their van.

Mahsa’s parents shared with news agencies that their daughter didn’t have any health issues despite what the government claimed.

Mahsa Amini’s death sparked a county-wide question about how she died! Questioning the government and their oppressive actions.

What makes people angrier than before is hearing government lies for 43 years! Depriving everyone of their basic human rights! Choice of what to eat, wear and belief!

Men also are limited on what they can wear, they are not allowed to wear singlets or shorts in public!

There is no independent political party in Iran, they cannot get approvals. The government cannot tolerate opposition! They shout down newspapers for writing a small article criticizing or questioning their actions. They jail and kill publishers and reporters. In the past 43 years, they have killed or jailed voices who opposed them!

The justice system is unfair and biased by government views, there has been a case where a woman got 17 years of jail only for removing her headscarf in public to show her point of view!

Mahsa Amini’s death sparked people’s anger and rage! It is apparent to the Iranian people that government has no willingness and flexibility to change!

Iranians are proud and love their country. They have tried all the peaceful approaches they could! They tried to improve their situation by voting to pick the bad from the worst (when all the candidates were picked by the supreme leader). When People noticed there is no improvement and impact, they decided to boycott the voting polls!

People in Iran are protesting with one key slogan “Zan, Zendegi, Azadi” which means “Women, Life, Freedom”! What they need now are your understanding and support! The Iranian government cut off the internet and also access to social media! They shoot directly protesters on street with guns used in wars! They shoot people whom they have done nothing wrong more than coming to streets and asking for their basic rights!